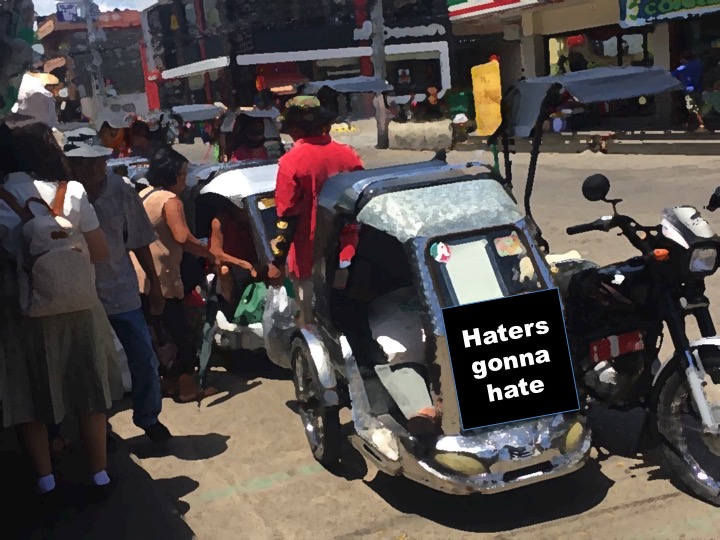 ONE OF THE favorite punching bags of netizens, at least those in my social circles, are tricycle drivers. The most common complaints include overpricing, refusing to convey, and rudeness.

While I believe that some passengers do have legitimate concerns on certain instances, and it is well within their rights to file a formal complaint ant to rant on social media, I lament that tricycle drivers have, in general, been treated contemptuously and have been “othered” as if they are cruel predators from another world.

I have read a fair amount of literature on tricycle drivers, particularly because one my past thesis advisees, Ralph Lasaten, had the tricycle drivers of Batac City as the subject of his sociological study. Among the observations that struck me was of Colbert Bellevue, an American. He said that because tricycles are in demand in most cities and towns in the Philippines, “tricycle drivers can command and exact chartered fare prices without any room for bargaining or haggling for a fair fare.” He went on to say that “the glitter of money in the heart and soul of a tricycle driver extinguishes the human kindness, compassion, helpfulness and goodwill to strangers; and henceforth, he becomes a ‘crocodile’ and a ‘wolf’ waiting for a prey at a corner of the road.”

I wouldn’t dispute Colbert’s observations. Indeed, the world is filled with opportunistic beings, and some of them happen to be tricycle drivers. In Batac where I work, complaints against tricycle drivers are also aplenty, and the famous line, “Dobliemton, ading” (Please double the fare) is met with revulsion. In Vigan and elsewhere, there have been cases as well of overcharging.

I usually have a great deal of tolerance with people ranting on social media, and this includes their ordeals with tricycle drivers, but a young lady’s Facebook post particularly caught my attention. You be the judge if the tricycle driver deserved the badmouthing he got from the lady’s sympathizers.

The young lady, a college graduate, rode a tricycle in queue (nakapila) at a shopping store in downtown Laoag. The tricycle driver said that if the lady was willing to pay twenty pesos, they would go immediately. The lady complained that it was too much and that with twenty pesos, she could already pay a bus fare to Batac. She noted that the jeepney terminal she was going to was just near. “It’s okay, but would you be willing for another passenger to go with you?” the driver asked. The lady agreed. But perhaps because of her impatience, she later told the driver, “nayunak to lattan,” she will just give an extra amount. So they went. Upon reaching the destination, the lady paid the driver 15 pesos. It is four pesos more than the regular 11-peso fare. However, the tricycle driver demanded 20 pesos because that was the amount she had earlier asked from the passenger. The lady reasoned out that she never promised to pay twenty pesos, and that she only offered to give something extra. After the short spat, the lady grudgingly paid 20. Shortly after, she ranted on social media, there posting the tricycle’s sidecar number.  The lady gained support from her friends who branded the tricycle driver as “abusado.” Many suggested that the tricycle driver be immediately reported to the police, to which the lady agreed.

As I said, there’s no denying that some tricycle drivers may be rude, some are choosy with their passengers, while others demand for more than the usual fare. But let us analyze the case of the young lady.

The tricycle driver was in a queue. He may have been in the line for at least half an hour. When passengers are scarce, the wait for a tricycle driver’s turn to get passengers could take an hour or more. It is definitely justified for them to have at least two passengers. But the young lady wanted special accommodation (she wanted to have the tricycle go pronto and all to herself) and that is why she offered to pay extra. The tricycle driver thought the young lady was willing two pay 20 pesos, but it turned out she would only give 15. I am not good in math, but I am sure that if only the lady was willing to wait, she would have paid only 11 pesos, and the tricycle driver would have earned at least 22 pesos, 33 if there were two other passengers, and even more if their destinations were farther, as 11 pesos was only good, according to the official fare guide, for the first one kilometer. Pray, tell me, how could the lady, in good conscience deprive the driver, who waited a long time for his turn, with the earning he rightfully deserves?

Five pesos. That’s the difference between what the lady was willing to pay and what the driver expected. Five pesos. The reason why the tricycle driver was portrayed as a monster, a crocodile, a dirt and abomination of society.

Hinay-hinay lang naman, mga kapatid. Please take it easy on them. Life is hard, yes. The tricycle drivers’ lives could even be more difficult than ours. Most of them do not have their own vehicles and have to pay a daily boundary to tricycle operators. In Laoag City, it’s around 250 a day, and that does not include expenses for gasoline. Only after they produce boundary and gasoline do they start earning for themselves. It should also be noted that the current minimum fare of eleven pesos was set by the Laoag City government in April 2011, that’s over seven years ago when prices of fuel and basic commodities were considerably lower.

“It’s not our fault that the queues are long, or that the driver does not have his own tricycle, or that transport fares have not been adjusted, or that life is unfair” one may justify, but it totally shows a lack of empathy for one’s fellowmen. Tricycle drivers, let me make this clear, are not our enemy.  They suffer like we do, and they even surely struggle more than the rest of us who can afford to spend a lot of time ranting on Facebook.

Because of scarce parking spaces, I prefer to commute when going to the centro, and tricycles have always made life easier. I pay more than what they ask. I pay more when the heat of the sun is punishing, or when the rains have the drivers soaked all day. I pay even more especially when they don’t ask for more. I do so not only because I can afford it, but because I want to. And each time I alight from the tricycle and hand them my fare, I say a word of thanks.

Like anyone, I could also be short-fused when the tricycle drivers are rude and in which case I don’t try to hide my disgust, but those are very rare instances, and as much as I could, I just take a deep breath and say a little prayer that God may help the fellow get past a bad day. I wouldn’t report anyone to the police—who already have more than enough in their hands—unless I am seriously aggravated. If it’s just my ego that’s hurt, I try to suffer a little, let it pass, and still keep my faith in my fellowmen.

It’s funny though that many professionals and high earners tend to be harsher in treating tricycle drivers. I know many of them. In stark contrast, Manang Glory, our help for  many years who has since retired, to this day refuses to use her Senior Citizen privileges, pays the regular fare, and most of the time gives even more. “Kaasida met” (I pity them), she would say. What a show of empathy. What a redemptive humanity!

This leads me to reflect on why tricycle drivers are easy targets of complaints both on social media and in the police station. And why people feel entitled to use the harshest adjectives on them.

While tricycle drivers are very much a part of our daily lives, we have become insensitive to their own concerns, blind to their sufferings, deaf to their pleadings, and while we ride their vehicles as they bring us safely to the comfort of our homes, we have only always seen them for their use but never for their worth. We have shamelessly “othered” them. And because they are disempowered and lowly, we easily pick on these tricycle drivers, for the smallest reasons, to be at the receiving end of both our personal frustrations and social disillusionments.

If only we could be angry with corrupt politicians as much as people verbally assault a tricycle driver for asking a few pesos he has rightfully earned, we could live in a better place. But no, we call our officials “honorable” even as they plunder millions from the public coffers. There is no enough outrage for inefficient and corrupt public works contractors, greedy capitalists who can’t let go of contractualization, no anger for the leeches in electric cooperatives and water distribution utilities, no disdain for big-time thieves and scoundrels.

For there is always the tricycle driver to hate and demonize.

And we could always feel better about ourselves.