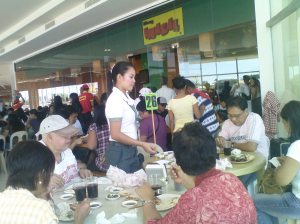 IF YOU’VE NOT BEEN to Robinsons Ilocos Norte, the province’s first mall which opened Dec. 3, you’re probably 1) too busy, 2) too poor, or 3) too spiritual to care about material things and other ephemeral joys.

But I doubt the third reason very much, dear karikna, because we know how luxurious and capricious a lifestyle our priests enjoy these days.  Not even the religious can resist the temptation to indulge, to the point of hedonism, which explains why the Bishop’s Palace has a swimming pool, and why some parish priests have expensive dogs they feed with imported food an impoverished human being (such as an underpaid parish catechist) cannot even afford to provide his own family.

Anyway, I have been to Rob IN (‘Robinsons almost Laoag’ is how some friends call it), and have seen all three films at the Movieworld there: Twilight New Moon, Ninja Assassin, and 2012.

The cinema is decent.  The chairs are comfy.  The sound system is good but not excellent, and  the video is clear but not crystal (there were line distortions on the screen), which made me wonder if the films have been shown in Manila hundreds of times before they were brought here.

Still, Robinsons theatres are a paradise compared to the rat-infested, archaic Isabel, the only other cinema in the province.

I asked the customer service representative (CSR) at the lobby when a new set of movies will be shown.  To my surprise, the employee replied, “Diak ammo, sir.  (I don’t know),” which was a pity because CSR’s are supposed to be well-trained to answer every query, specially valid ones like mine.

I then advised the young lady never to say “I don’t know” when she is in a position to know.  The better answer would be, “I’ll try to find out,” which she did eventually.  According to her supervisor, the movies last for one week, but due to public demand, they may have to extend the screening of some movies.  The supervisor specifically mentioned “New Moon” and “2012”.

I told this story to my colleagues at MMSU, and one of them, out of curiosity, asked the CSR the same thing when the former went to the mall.  Alas, he also got the “Diak ammo” reply from the lady. END_OF_DOCUMENT_TOKEN_TO_BE_REPLACED