I wish to take exception to Herdy La. Yumul’s column titled “Utlegged”, published in the other week’s issue of your respectable newspaper. While I support the young writer, who happens to be my son, in all of his undertakings, his rather harsh commentary on Bishop Sergio Lasam Utleg is something I do not approve of. In fact, I found myself weeping a lot because of the grief and agony the article gave me.

As a church volunteer, I have always known Bishop Utleg as an honorable person and a respectable church leader. He is humble and kind, caring and nurturing.  I appreciate very much that he sacrificed his whole life in the service of God’s people. I, my family, and many other churchgoers attest to his vast contributions in nurturing the spiritual lives of his constituents, and in helping uplift the lives of the poor and the oppressed. No doubt, he is well loved and well admired by his flock. END_OF_DOCUMENT_TOKEN_TO_BE_REPLACED

“Since reading Herdz’s 2000 essay on the problem of being ‘Filipino,’ I knew that a progressive radical writer was in the making, someone who would challenge the herd mentality of our time. The essays in this volume attest to a worthy successor of the great subversive Filipino intellectual, Isabelo de los Reyes, also nurtured in Herdz’s homeground. Accessible and provocative, Herdz’s writing is sure to blast open closed minds to the winds of change.  I welcome Yumul’s intervention into the bloody arena of our society undergoing tumultuous upheavals, hopefully advancing toward the day of national-democratic liberation.”  E. San Juan, Jr., Social Philosopher

Herdy Yumul  was one of my students—he is bright, brooding, and sensitive. I can assure you that he is not a fool.  I am glad we have young people like him who can write with tremendous courage. We may disagree with him, but we cannot fault the depth of his feelings.

Is this how we train budding sociologists in UP?  We train our students to be critical of their surroundings as well as to be responsible for their actions.  We want them to live with hope rather than wallow in despair.  If the boldness of our ideas is what it takes to remain hopeful, then I would encourage it – as I would encourage you very much to engage Herdy Yumul’s insights into the Filipino condition.  Randy David, Sociologist

Herdy fits into the whole continuum from cool as in “Provincial Bliss” where he details his decision to come home to Ilocos, to furious as in “Brilliant Agca, Stupid Quezon” where he rescues a fledgling affronted.  Straightforward and unabashed, he shows unflinching courage to challenge authority and conventions, but within the parameters of dignity and taste.  The motorcycling Herdy with the mandatory helmet has, in the past ten years, hit the road to becoming the young Ilokano blood who wields trilingual writing prowess and finesse.  With The He(a)rd Mentality, he arrives, and with much success.  Alegria Tan Visaya, Chief, Center for Ilokano-Amianan Studies, Mariano Marcos State University

He was not simply teaching you the works of his idols, he was showing you what he thought about them. He was not only asking you questions on how much you know about the topic, but he also wanted to see how much you’ve thought about it. He thrived on thoughts and ideas, not only those of his inception, but also from everyone around him. He magnifies even the simplest of ideas, scrutinizes it, then arpeggiates it to the point where all nuances are validated or rejected, never shelved. That is his profound effect on me. That is the power the immutable Sir Herdy so generously brings to the He(a)rd.  Marc delos Reyes, an “immensely cheesy, beer-loving” former student of La. Yumul

I first took note of Herdy Yumul when someone forwarded a blog he wrote for the Internet, questioning the value of being a Filipino, and the logic of believing in God.  I was fascinated by the way he wrote, having journeyed along the same path during the early course of my life.  In a way I considered him a twin-soul.  Of him may be said, as Carlos P. Romulo once said of me when I was his age, “In the manner of the celebrated dramatist, Eugene Ionesco, he does not stop asking questions, a supreme quality which is characteristic of an engaging and living mind.  And in the questions he asks, we are able to perceive the glimmer of the significance of the human effort in our own society and time.”

I valued the quality of his mind enough to devote a series of broadcasts to answer the questions he asked, all in all, in 24 pages of text and three weeks of daily broadcasts on radio DWBR-fm and television UNTV, recently included in Chapter 8 of my latest book, Make My Day Book 25, Heaven and Hell.

I know for a fact that our dialogue which continued in subsequent telephone conversations, has profoundly influenced his mind (and mine) and made him a true believer in the destiny of the Filipino people, and in the existence and goodness of God. Hilarion “Larry” Henares, Jr., past chairman, National Museum of the Philippines 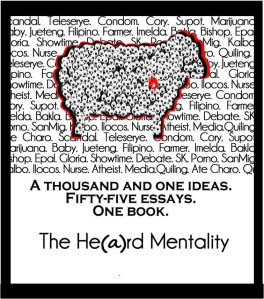 Yosi. Laklak. SanMig.  Epal.  Astig. Dedma.  As a Filipino living in the states for the past forty years, I would not have known what these words meant if not for one writer I have followed more than any other. Herdy Yumul—an eclectic mix of spunk and diplomacy, of the profound and of the profane—educates and reeducates me on my noble roots.  Lolita Chestnut, New Hampshire, USA

It is in his seemingly mundane everyday experiences that Herdy draws out a treasure trove of discussion points about Filipinoness. He needs no complicated quantitative analysis to draw out certain realities that make us who we are. His life is the big social experiment where what is commonsensical to many of us (in our haste to escape the moment) is magnified under his sociologist’s eye and stripped layer after layer to expose what kind of social animals we are. And in so doing, to render who he is in a dignified attempt at self-reflexivity.  Alona Ureta Guevarra, Department of English, Ateneo de Manila University

As a writer, Herdy’s loyalty is to writing itself.  The 55 essays in The He(a)rd Mentality will comfort and unsettle the author’s readers, order and re-order their beliefs and advocacies, and offer them a tentative perspective while they’re looking for one.  I expect the readers to find in his humor the highest level of thinking (In Herdy’s San Beda College it was called philosophizing) that is written in excellent prose.  Jose Ma. Arcadio Malbarosa, Department of Political Science, De La Salle University

Here are nine studies finely crafted by fabulous Ianree B. Raquel for our book cover.

Would appreciate your inputs, folks.  Let’s please choose one.

I FINALLY agreed, dear karikna, to pursue what well-meaning friends and readers have been prodding me to do:  write a book.

I made the decision the other week when I opened our refrigerator and saw my newspaper column wrapped around a bundle of Saluyot.  I asked mom why, she said it was, anyway, from an old issue.

Even with the amounts of time, and energy, and sanity that go with writing a regular weekly column, I have always known that yesterday’s paper is today’s junk, and there was no way I would have been so sensitive and felt offended.  Still, not unlike in a melodramatic soap opera, memories came flashing back because of that incident.  I remembered how many hours of sleep I missed to meet deadlines.  The cups of coffee downed, and the many bottles of SanMig Light I gulped to reward myself for articles that I was particularly happy with.

I recalled one time when I hit the keyboard while a nasty typhoon pounded the city.  Because my laptop ran only on battery, I had to adjust the screen to its dimmest, and to my eyes’ protestations, so that the power would last.  And then there were times when internet access would be faulty, and, aboard my good old bicycle, I would brave the rains or the scorching heat, to find a computer shop with a working connection so I can transmit my work.

But the most difficult part lies in determining what to write.  There were countless moments when I would stare blankly on the screen, trying to balance, not with ease, the varying interests of a wide range of readers.  There are those who would complain when I write about local issues, which they cannot relate to because they are not from Ilocos.  But then, how could I be significant as a writer if my essays are so not-here?  I see things in the locality, and I get affected by issues in the community.  How can I not write about them?

The big challenge, I realized, is in striking a balance, a synthesis.  The order of the day is to show how the issues we face as Ilocanos are  not remote and isolated, but are rather inevitably linked with the struggles of the Filipino people, and with the sojourn of humankind. END_OF_DOCUMENT_TOKEN_TO_BE_REPLACED