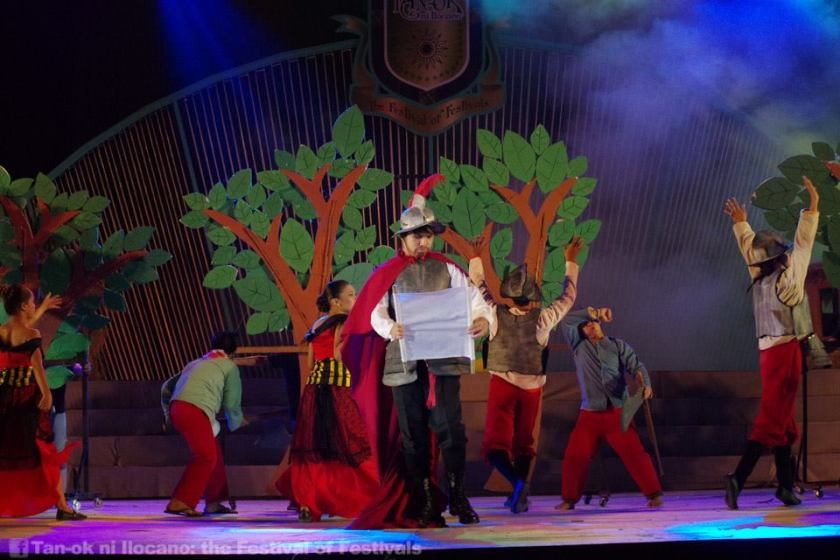 (This is the second of a series of articles comprising my critique on the Tan-ok ni Ilocano Festival of Festivals 2014 held Nov. 29 at the Marcos Stadium in Laoag City. Read also the article Batac a genius… no loser!)

It was the fourth edition of the Tan-ok ni Ilocano Festival of Festivals, now considered as the biggest gathering of Ilocanos, having drawn almost 50,000 in the Marcos Stadium last Nov. 29 at the Marcos Stadium. Celebrating greatness in most creative forms, the show featured once more performances from each of the 21 municipalities and 2 cities of Ilocos Norte.

Tan-ok, arguably the most anticipated event organized by the province, has steadily led to a state of maturity, taking small steps since its debut in 2011.  Without blinking an eye, I’d say that last installment was the best ever. There were a lot of breakthroughs—not just steps but strides towards even greater planes for this phenomenon. Let me, dear karikna, detail my observations through this series of critical notes.

“Your stories are your wealth,” the judges posited during the debriefing meeting held the day after the competition. They expressed amazement over the clarity and richness of the narratives they saw unfold in most performances. Unlike the street-dance based festivals in the Visayas like the Sinulog and Dinagyang, the strength of Ilocano presentations indeed lies on our people’s tales.

Personally, I am glad that the stories presented this year were not only entertaining, but more truthful. Indeed, as confessed by Edna Vida Froilan, one of the country’s dance icons, who sit as one of seven Tan-ok judges coming from diverse backgrounds, judges are like “babies” who don’t know or know very little about the culture of the locality. They thus evaluate performances based only on what they see. The burden of determining authenticity, therefore, are not on their shoulders.

It was wise of the festival organizers headed by creative director Aian Raquel to hold a story conference prior to the big event. I am happy (and humbled) to have been invited to share my thoughts to choreographers and key people involved in drafting the storylines of every contingent. I would usually just write critiques after the show, just like this one. Interacting with our local artists early on was a welcome experience because it allowed me to talk more on the future, and ramble less about the past. During the conference, I already had a feeling that this year’s Tan-ok will be very different. That feeling was right, and it was very evident in the case of Laoag.

I have always criticized Laoag for promoting lies and for creating confusion about the Pamulinawen Festival in particular and our people at large. I know that not a few egos have been hurt. My commentary strongly condemning the portrayal of Ilocanos as cockfighters in last year’s Mini Tan-ok, and eventually at the nationwide Aliwan Fiesta, no doubt was the last straw for some people.

Christian Espiritu, Laoag’s multi-awarded choreographer, must have somehow felt bad about my commentary. Since then, I observed his discomfort each time we chanced at each other in events, and it was unfortunate because, truth is, I really have very high admiration for this maverick of an artist who steered Laoag City to the national championship in Showtime, and in the Tan-ok showdown in 2012 and 2013.

Until a very pleasant surprise caught in me one afternoon. Christian sent me a Facebook message requesting for a meeting. He said he fully agreed with my points on truthfulness and authenticity in presenting the Ilocano story, and that my help is needed in preparing the storyline for Laoag’s performance this year. “Yes, of course,” I told him.

During the meeting at Johnny Moon, Christian came prepared. He had done research and was determined to do away with the Pamulinawen love stories they wowed the audience with in the past years. He admitted that the narratives in those love stories neither had strong cultural nor historical basis, and that they wanted to tell a real story of our people this time. He also shared about the difficulty of interpreting the Pamulinawen, given its lack of historical roots like other more established festivals in the country, and how authentic Ilocano dancing does not fit in the Aliwan Fiesta format.

I basically just listened to him and said, “That’s right, sir” each time he asked me, “Is this true, sir?” The story is about the birth of the city (El Nacimiento de Una Ciudad), starting from the time the Spaniards arrived and observed the transformation of a thickly forested area into a clear and bright place (Nalawag!) to the building of a new city, to its rebuilding after a devastating earthquake, and to its current stature as a hub of progress in this part of the country. Laoag City’s identity as Sunshine City is interpreted on various levels.

When Christian told me about his historical inclinations, there was only one thing that I asked him about, and that is whether such account of events could be entertaining on stage. Christian was strongly convinced about his yes. It also helps, he shared, that the main dancers will be kids—cute, talented, and refreshing. While it may be a little difficult to teach them, given their playfulness, and considering as well that the little ones cannot stay up too late, unlike older dancers who can practice up to past midnight, Christian was very positive that everything will turn out great.

Fast forward to the Tan-ok big night. Laoag’s performance was notably a champion material the moment Laoag’s small ones stepped onstage and delivered big time. Props and set were grand but did not overshadow the performers. Above all, the story was as clear as sunshine. We now all know about the results. The Christian Espiritu-choreographed Laoag performance won first place. Another contingent under his care, Nueva Era, ranked third.

Christian Espiritu is a real genius. And our kids are lucky to learn from him in a magical way true stories of Laoaguenos they can proudly bequeath to the next generations of Ilocanos that will come after them. Pamulinawen is looked at no longer as a lady with a heart of stone but the the embodiment of all the good qualities of Ilocanos: piety, resilience, hard work, and solidarity, among them.

I waited for a long time for an opportunity to say I am very proud of my city’s act in the Tan-ok festival. I am glad that day came on November 29’s starry night.

(Next in this series: Batac a genius, not loser)

2 thoughts on “Why this time I am proud of Laoag”