The Tan-ok ni Ilocano (mini version) Dance Showdown was held tonight at a half-full Ilocos Norte Centennial Arena. ‘Mini’ because, unlike the full version held last December, the number of dancers are limited (only 12-16), performance time is shorter (3-4 minutes), and props are simpler and smaller. The show is also less budgeted.

The idea is to form groups that can be feasibly booked for events, including national and international gatherings held here in Ilocos Norte. All the 21 municipalities and 2 cities were expected to showcase their rich culture through dance. “Tan-ok” means great, so the contingents were tasked to highlight what their respective peoples and places are proud of and known for. All the contingents accomplished that, except one: the champion.

Laoag City’s routine, no doubt, was most entertaining. Thanks to top-caliber choreographer Christian Espiritu—whose talent I personally admire; and who we in The Ilocos Times chose as one of the Top 10 Ilocanos for 2013—the dance was well-executed, lively, and colorful. It portrayed “pallot” (cockfighting), and presented the vivid scenarios inside a cockpit. It was fun to watch.

But beyond fun and entertainment, many viewers—including Prof. Arsenio Gallego, vice president of the Dance Education Association of the Philippines—have raised the following questions: Is cockfighting the pride of Laoag City? And, is there verifiable evidence that Laoageños, or Ilocanos in general, are drawn to cockfighting more than other ethnic groups in the Philippines?

I am not, dear karikna, opposed to cockfighting and neither am I moralizing here. But is this really the story we want to creatively tell people who want to know us more? Is this really our story?

San Nicolas celebrated their pottery; Batac told their folk history; Pinili took garlic to the stage; and Vintar let out their Siwawer bird.

Not Laoagueños, or not just Laoagueños, for there is cockfighting in every nook and corner of the Philippine archipelago. Why then was “pallot” chosen over many things we can be proud of in Laoag? Our guests who will watch this presentation, what impression will we imprint in their consciousness about who and what we are as a people?

Ah, the crisis of identity. And I thought we are beginning to be serious in our efforts to define Laoag City and the Pamulinawen Festival.

All these said, let me reiterate that the Laoag dancers were really superb. I am proud of their skills and showmanship. And they should not be faulted for telling a story that is not distinctly ours. It was not their choice to put entertainment over truthfulness and cultural integrity. Definitely, it was not their decision to misrepresent the people of Laoag.

Tie between Laoag and Batac

This I gathered from inside sources. During their deliberation, the judges initially had Batac and Laoag at a tie for the championship. There were three judges, and two of them are Ilocanos: Edred de Vera Piamonte and Menardo Panela Jr., both from Vigan City. The third judge is Edna Vida Froilan, former artistic director of Ballet Philippines and former director of the CCP dance school.

And here was the judging criteria:

For the championship, Piamonte–the artistic director of four well-known Ilocos Sur festivals– voted for Batac while Froilan chose Laoag. It was a tie between Batac and Laoag for Panela, who has participated in dance recitals choreographed by Froilan. The judges considered announcing two champions but decided to split the tie. Froilan argued that Laoag’s story was clearer. She also said it was “ripe.” In the end, the board of judges chose Laoag.

I agree with Froilan that Laoag’s cockpit story is very clear. But it is also clearly not ours, or not just ours. As to “ripe,” it was ripe mango on a banana tree.

I have been accused several times of not being proud of Laoag, my hometown. Nothing can be farther from the truth. I love my city. I am proud of my people. And I look forward to more artistic presentations celebrating our real greatness outside the cockpit. 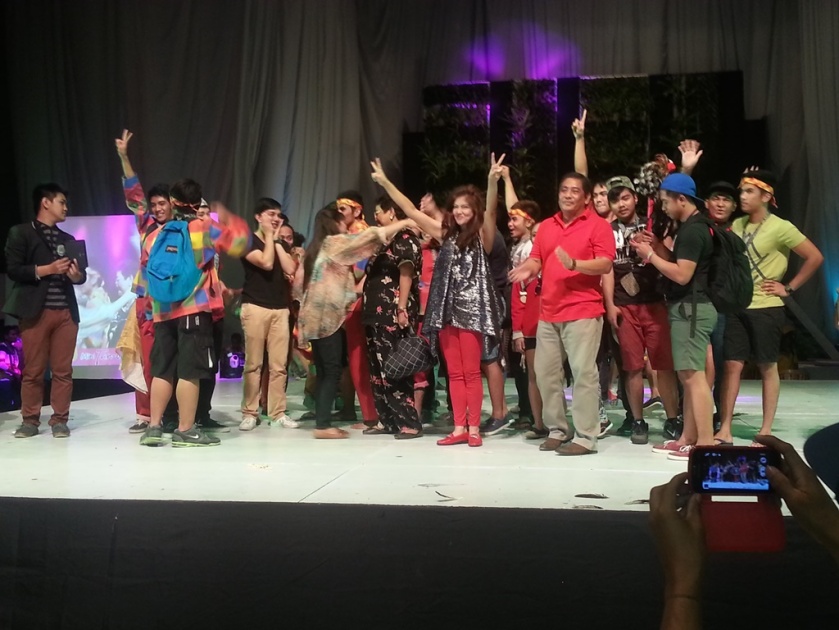