It is fiesta month in Laoag City, and each day is filled with activities initiated by various sectors. Naturally, politicians are everywhere grazing festivities and making themselves more visible than usual to the public eye.

It was in a beauty pageant held a few days ago (I am not, dear karikna, fond of beauty contests but I am fond of my relatives; my cousin’s daughter tried her luck in that competition) that I noticed how our city leaders have decided to package themselves.

Politicians calling themselves father or mother of a town, city, province, or the nation is not exactly unusual in the Philippines, but my city’s case is interesting. Chevylle Fariñas, the first-term mayor, succeeded her husband Michael, who was mayor for nine years and now the vice mayor. In that pageant, the welcome remarks was delivered by their daughter Mikee, the new chair of the Association of Barangay Councils and ex-officio city councilor. In her entire speech, from her customary roll call of the guests to the end, she repeatedly and proudly referred to the mayor and vice mayor, as “Mother of the City” and “Father of the City.” I felt both uncomfortable and saddened listening to that speech. And confused, too… should we now call this young councilor, Ate of the City? What about the other city officials? Do we call them Tito and Tita of the City? Who are our ninongs and ninangs?

Everyone knows that the young Fariñas is in office not really on her own merits, but because of her parents’ impressive achievements. The challenge for Mikee then is to prove that she deserves the position—that she is a good leader who just happens to be the mayor and vice mayor’s daughter. Surely, she deserves a chance to prove herself, but that would only be possible if she restrains from treating public events as family affairs.

During the grand parade on Feb. 9, the Fariñas couple were also introduced that way by City Information Officer Michael Formantes. There were over 50 floats in that parade, but the first vehicle (after the patrol cars, of course), had Mikee waving to the crowd and to the platform guests led by the mayor and the vice mayor. And as the young politician passed by the stage, I saw from her parents’ faces what we usually see in parents’ faces during children’s ballet or piano recitals: they were proud. Proud father and mother of the city. Proud father and mother of Mikee.

But why do politicians fondly refer to themselves as parents anyway?

“A democratic political culture indicates leadership by a public servant and not the father or mother of a local or national government unit,” posits my friend Ruel Pepa, a passionate philosopher and culture surgeon now based in Madrid, Spain. He explains that a patriarchal or matriarchal government unit is obviously feudal, where officials dispense authority like landlords do over tenants or slaves.

Moreover, this is a feudal mindset that takes advantage of the high value Filipinos place on the family, and of the importance of respecting and obeying our elders. This is “maybe because they know that we dare not question the actions of our parents… we say that even if they do wrong, they are still our parents,” a University of the Philippine professor opined on a status I posted on social media. Add to this our country’s colonial past and neo-colonial present—with our people having been lorded by foreigners then and our own power elite today—and this manipulative branding would really work on the vulnerable many. In a real democracy, we elect public servants whose authority emanates from the people. Thankfully, we can choose our leaders periodically—we can change them after their limited term or, worse, kick their butts from their seats on certain grounds—unlike our real parents whose blood will always run in our veins.

We elect officials, not parents. We are not their children. They are not fathers and mothers of any land. This branding, this packaging—which I call Mother Packer branding—manifests an immature democracy politicians are all too willing to exploit.

I argue that a matriarchal/patriarchal style of running a government unit no longer has a place in our time and age. More than ever, we must today professionalize government leadership. Getting rid of political dynasties may be difficult, but those who have made politics a family career must at least minimize accentuating their blood relations and maintain a professional tone in their line of duty.

What are our alternatives then? I listed a few:

If they want to be truthful and candid, traditional politicians may also choose among the following:

Note that these are only initial lists. There surely could be more.

As for our leaders, let us accord them our support and respect. Let us take part in their worthy programs even as we keep a watchful eye on them, our servants.

Postscript:  By the bye, a blog visitor by the name Mikee Fariñas left the following comment on a post I made five years ago. I am impressed by the visitor’s receptiveness to constructive criticism and willingness to engage in dialogue. I hope she keeps that way, and more so now. 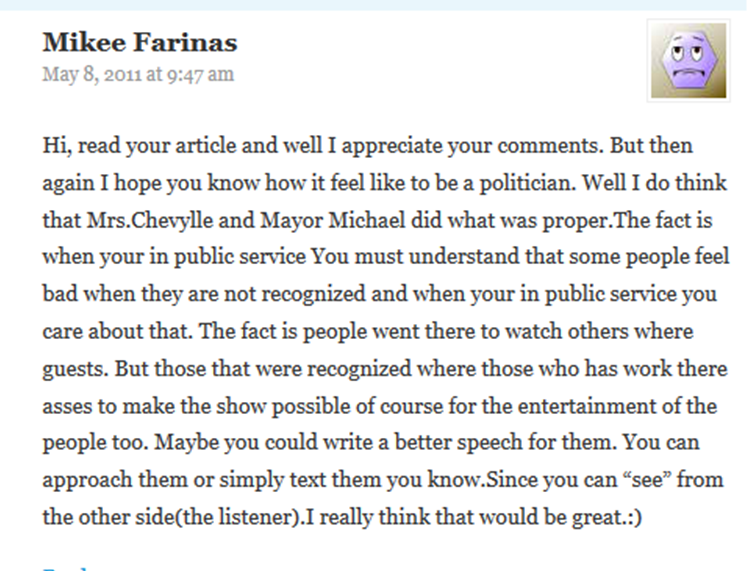 8 thoughts on “We elected leaders, not parents”