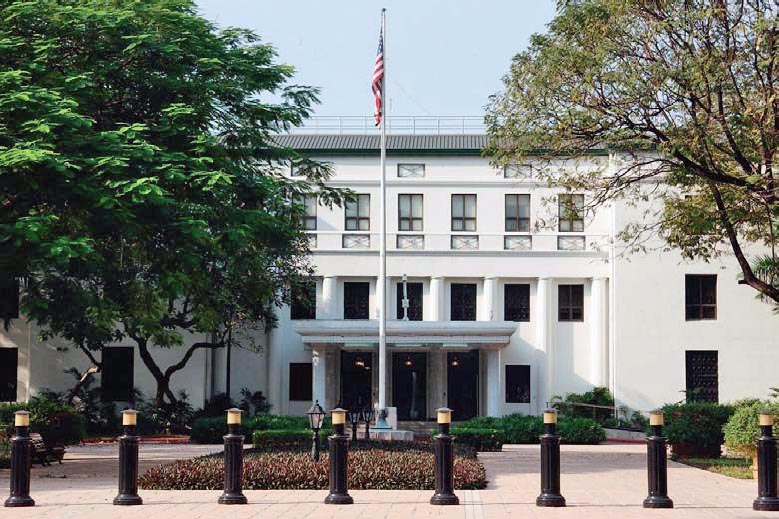 My paper abstract was accepted for presentation at an international conference in Hawaii on Nov. 14-16. And the next step was to get a US Visa. I was anxious. For who among us hasn’t heard of heartbreaking, if not horrific, experiences with consuls at the US embassy?

The whole process of applying for a visa, and the mere thought of it, seemed daunting to me: bank payment, online application, setting a schedule. My journey began with an online application that was, alas, delayed by a series of unfortunate events: unsuccessful attempts to schedule a group interview (there six seven of us from our university applying together), lack of common available time among us six, adjusted schedules because of flooding in Manila, and the university staff in charge of assisting us traveling abroad for two weeks. Meanwhile, plane fares were steadily going up as days passed.

Then the schedule came: September 6, 2013, 6:30 a.m. All of us got the same appointment, but we were to be interviewed as individuals, not as a group, which I thought was unfortunate because I heard group interviews have lower casualty rates. Anyway, I made sure I had all necessary documents that may be asked: passport, appointment letter, certificate of employment, bank certificate, samples of my published works, and a draft of my research paper.

A few days before the interview, I searched on the Internet articles about actual experiences of Filipinos during visa interviews. There are a lot of tips shared online, but, aside from coming in prepared and having documents that may be asked, the greatest advice I got was to be honest. Consuls are rigidly trained to detect lies, I read. And I learned too that they have eagle eyes for inconsistencies between what you wrote in the application form and what you say during the interview.

I don’t have a problem being honest and consistent, for I know myself quite well, and I am comfortable being me. My real fear was in being assigned either to a cruel consul or to a good one who woke up on the wrong side of the bed. And so, the night before the interview, I prayed to God to give my consul a good night’s rest, and, hopefully, sweet dreams.

It was a rainy morning, but we arrived at the embassy on time. Although the line was long, it was orderly and it moved steadily. I bought an overpriced umbrella from a street hawker to protect myself from the rain. In less than an hour, after going through rigid inspection, we stepped inside the consular building. We then proceeded with the first two steps: getting a number (mine was 2025), and going through the biometrics system. While waiting for my turn, I tried listening to the ongoing interviews with the consuls. I was seated in the front pew, and I was able to hear every word and witness every reaction, both of joy and frustration. It’s usually either, “I’m sorry, sir/ma’am, but you have not strong ties outside US, and, under US immigration law, you do not qualify for a visa” or “Your visa will arrive in a week… Enjoy your trip.”

Listening to the ongoing interviews, my anxiety escalated. Next to meeting one’s Creator and listening to His judgment, an interview with a consul could be the most heart-pounding experiences a person, especially one from a third-world country like ours, could have. Furthermore, I was fully aware that some factors could be taken against me. I am young and single. I don’t have properties under my name. And neither do I have a fat bank account.

By the time my number was called, two of my fellow paper presenters have already been turned down. “You can’t afford that trip, it’s too expensive for you” said the consul to a colleague whose salary is equal to mine. “You’re too young to present a paper” was the reason another young faculty researcher like me was denied. When 2025 was flashed on the queue screen, I proceeded to and lined up at the designated counter. The consul was attending to the woman before me, a yuppy working in Makati. Their conversation was pleasant and jolly, and that made me feel a little relaxed. However, towards the end of the interview, the consul suddenly became serious and told the Makati girl, “I am sorry…” and handed her a blue paper detailing why she was not granted a visa. He dispensed an advise on what the applicant should do next.

And then it was my turn. I moved forward and greeted the consul.

Me: Good morning, sir. [And then I slipped my passport and appointment letter through his window.]

Consul: Good day, how are you doing? [He glanced at me and then continued looking at his computer monitor.]

Consul: What is your purpose of going to the US?

Me: I am presenting a paper at the Nakem International Conference at the University of Hawaii at Manoa.

Consul: Tell me what your paper is about.

Me: My paper examines the “English-only policy” being implemented in some Philippine schools and its effect on linguistic education and learning at large.

Consul: Why does that interest you?

Me: In Laoag City, my hometown, there was a case of three students expelled from school just because they spoke Ilokano inside the campus. As a writer and sociologist, linguistic justice and cultural integrity is very close to my heart. Also, the use of the mother tongue in the early years of basic education is now being enforced by the Department of Education.

Consul: Use of the mother tongue? Is that really beneficial to students?

Me: Yes, sir. Various researchers positively correlate the use of mother tongue to higher aptitudes in science and math. In developed countries like Japan and South Korea, for example, science and math education are done using the native languages.

“But I don’t get it. Filipinos’ facility of English seems to be deteriorating. Won’t it decline further if native languages are used in school?” the consul asked in what was beginning to sound like a thesis defense.

Me: No, sir. Using the L1 or an individual’s first language will better prepare him to learn an L2, a second language, and so forth. In the case of many of my students in the university, they cannot write good Ilokano, and neither are they confident with their English or Filipino. Fortifying a person’s linguistic foundation must be done in the early years of schooling.

Then, the consul, half smiling, spoke: “Ti agpayso, Herdy, ammok ti agsao ti Ilokano.” (The truth, Herdy, is I know how to speak Ilokano.) [I was surprised. I anticipated many scenarios, but not this one. His Ilokano had a very minimal, almost unrecognizable, twang.]

The interview went on:

Me: Wen, sir. (Yes, sir.) [Then I briefly enumerated all my foreign trips.]

Consul: Mano a tawenka a mangisursuron? (How many years have you been teaching?)

Me: Yes, sir, sangapulo ket maysa a tawenakon a mangisursuro ken agsursurat. (Yes, sir, I have been teaching and writing for 11 years.)

Consul: “Mangisursuro. Agsursurat.” (Teaching. Writing.) [He nodded and smiled. It looked like he was amused with the words.]

Me: Thank you, sir. Thank you.

Consul: Dios ti kumuyog. (God be with you.)

Still holding the documents I brought which he never asked to see, I walked away from the booth feeling like it was just a crazy dream. An American consul speaking in very fluent Ilokano! But why?

Out of curiosity, I returned to the consul’s counter as the person next in line was beginning to step forward.

Me: Apay ammom agilokano, sir? (Why do you know how to speak Ilokano, sir?)

Consul: [Observing how amazed I was, he laughed a little.] Agsursuroak. Agbasbasaak. (I am learning. I am reading.)

As I walked out of the building, I bought a coffee mug at the souvenir shop to remind me of the pleasantly odd experience.

Two days later, my passport arrived through courier. Neatly pasted on it was a 10-year multiple-entry visa.