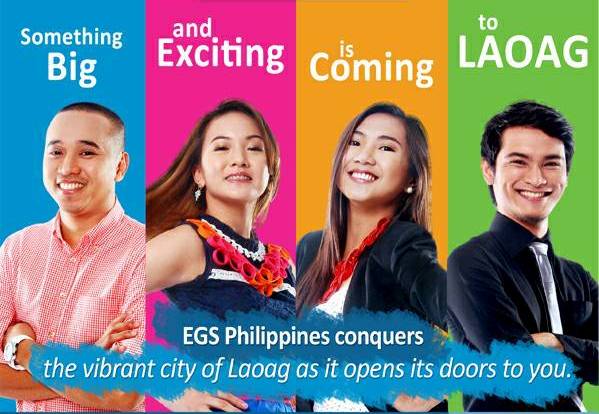 The Long wait is over.

After three years of preparations for the entry of large BPO (business process outsourcing) companies in Ilocos Norte, one of the largest call centers across the globe is setting up a branch in the province.

Expert Global Solutions (EGS) is expanding in Ilocos Norte, and  is opening at least 600 jobs for call center agents and management personnel.

The company offers a basic, entry-level monthly pay of P12,500 for call center agents and a sign-up bonus of P10,000. Employees who meet prescribed targets will also receive performance bonuses and incentives. Salaries for managerial posts start at P30,000.

Applicants, who must at least have one year of college, only need to bring a resumé at the Ilocos Norte Centennial Arena’s i-Hub Center where recruitment is in full swing. Located in Laoag City, the arena is one of the sites being considered for the call center expected to open next year. While the offices are being constructed, successful applicants will undergo training, with pay, at EGS Clark, Pampanga.

As much as possible, the company wants to hire Ilocos Norte residents for the job openings, although applicants from other provinces are also welcome. They are also encouraging Ilocanos working in their other branches to come home to the province.

The company is headed by Mr. Rainerio “Bong” Borja who has over 25 years of experience managing large-scale customer service, IT support and consulting organizations within the Asia- Pacific region. Mr. Borja, who has also served as president of Aegis People Support, is a founder of the Business Processing Association of the Philippines (BPAP)—the umbrella organization of BPO, contact center and IT-enabled services companies in the country—and was its chairman for five years.

This development, the coming of a major BPO company to the province, is the result of various initiatives by the Provincial Government of Ilocos Norte (PGIN) and the Metro Ilocos Norte ICT Council (MINICTC) which is composed of representatives from various government agencies, private organizations, and educational institutions. MINICTC is affiliated with the National ICT Confederation of the Philippines which currently has 37 member-councils.

Governor Imee Marcos has been aggressively promoting the province as an investment site for BPOs. She has gone to various functions of the BPAP and the Call Center Association of the Philippines to meet with the industry’s top executives. Job creation is on top of the provincial government’s agenda.

12 thoughts on “Finally, an honest-to-goodness call center in Ilocos Norte”