Yesterday was toxic for me, having to shuttle from one place to another to speak in an event held in a vast hall teeming with dreamy eyed graduating students, do interviews and gather data for articles I am working on, and struggle to sit down, finally write, and beat deadlines.

And so, I decided to go to the SPA later that night. And no, not to a place of jacuzzi, rose petals, and scented air, but to a place even more refreshing and enlivening.

I have always been intrigued by the Special Program for the Arts (SPA) of the Ilocos Norte National High School. What do they do there? Are they a bunch of the stereotyped artistic weirdos? How artsy do they really get?

The school held its annual exhibit and recital last night, March 14. I was not personally invited, I just responded to a Facebook post informing everyone of the event. And, yes, it was a joy.

There was an indoor exhibit and a musical-theatrical recital at the school grounds.

I spent some time listening …to the inspiring talk of my friend Aian Raquel who I didn’t know was the event’s guest of honor and speaker, to a boy who made passionate love with his violin, choral presentations, a stage act, and then more. Organizers were offering me a good seat with the best view but I chose to stand at the back so I could gallivant at my wish.

Aian said something to this effect, and I am rephrasing here: “You are lucky to be educated formally in the arts… my initiation to the arts I, as a grade schooler, attained by watching beauty contests, concerts, and events held in Laoag and Batac, places away from where I lived: the island of Badoc… I was never really good at one particular art form. I am not a good singer, dancer, or writer… and some of my mentors and friends teased and chided me for being a ‘jack of all trades’, but one woman reassured me that I am on the right path. She referred to what I have been doing and which I should continue to hone, ‘art direction'”

I spent more time inside the exhibit hall, marveling at multimedia arts, visual arts, and creative writing manuscripts. The kids were game enough to do “mini-recitals” inside the exhibit room, and just for me. I asked them about the stories their young, imaginative minds churned out. They seemed nervous at the prospect of storytelling in front of a shining, shimmering, widening forehead, but they carried on.

John Louis de la Cruz shared the plot of his still unproduced short film, “On a Sunday Afternoon”. The story is simple and the conflict may sound trivial, but who wants complications on a Sunday afternoon? It is about a boy who wanted to hang out with his friends.  But the friends were not replying to his text messages, and so he felt sad and was in a bad mood. Later in the evening, his friends paid him a surprise visit, and he was happy… and so is the ending of the story.

Chryztlerr Nicolas wrote the short story, “Marcus the Superhero,” which is about a man avenging his people from violence. Asked about his inspiration, the diminutive boy spoke of the crimes that befall us in real life.

And this gallery brought me back to the BMX days of my happy, carefree childhood:

Some students approached me for photographs and asked me to sign their book compilations which I would have borrowed and read at home if only I was not too shy to ask. I was glad to meet these young writers, my fellow writers, and, while there, as I was browsing through their works, I closed my eyes for a few seconds and wished that they would not give up on their literary aspirations.

Kudos to the young artists of Laoag City and Ilocos Norte. May our tribe increase in every way, all the way. And with these sexy bottles of beer, I say: Cheers! 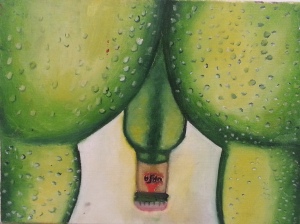 8 thoughts on “Going to the SPA and chilling out with young artists: a recital and exhibit at INNHS”