(The Ilocos Times and riknakem.net are embarking on a voter information campaign dubbed “Keddeng ti Umili 2013”. In this issue, we are featuring the mayoralty candidates in Laoag City. News articles on the interviews, conducted mainly by your karikna, are published in the paper.)

She is sugar, spice, and everything nice. She answers even the most controversial questions but knows how to get though them unscathed. She pledges to speak ill of no one, even if her main political opponent is having a field day throwing mud.

He is stiff and stern. It is not difficult to be afraid of him. And having a reputation of literally slapping people, which he does not categorically deny, is of no help. But he came prepared for the interview, bringing with him documents proving that the current administration led by his nephew is anything but sugar, spice, and everything nice.

It has happened elsewhere, family members torn widely apart by politics, but we did not see it coming here in Laoag City. The Fariñas Family has always seemed close-knit and formidable until now. There was hope against hope that they would resolve their issues among themselves, but in politics, dear karikna, hope has its limits. And so it has come to this.

Roger accuses the couple—Mayor Michael and ABC President Chevylle—of corruption and ill-gotten wealth. He cites a newly constructed house, which he values at 80 million pesos, condominium units in Manila, and luxury cars, among others, as proof of shenanigans. He decries the deterioration of peace and order, overpriced but losing government ventures such as the Laoag City General Hospital, and dirty public spaces which was unseen of during his term when the Laoag first gained fame as the Philippines’cleanest and greenest component city .

To all these, Chevylle has ready answers. In her husband’s nine-year stint, she says, Laoag City has reaped various recognitions, including the ‘Seal of Good Housekeeping’ from the Department of Interior and Local Government. She argued that “If there was corruption, it would have been known because the ‘seal’ guarantees efficiency and transparency in governance.” She says their house, located at Brgy. Vira in the city’s outskirts, costs only eight million pesos at most while denying other properties Roger asserts they have amassed. While enumerating their various businesses which contribute to their family income, this advertising graduate of Miriam College says she is not materialistic and is content with a simple lifestyle. She proceeds to show a crucifix pendant, a gift from his late father, which she says is her main piece of jewelry. END_OF_DOCUMENT_TOKEN_TO_BE_REPLACED

Click on this pic for the article posted at abs-cbnnews.com. Your karikna was quoted heavily in this report by Ira Pedrasa. 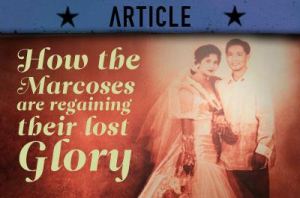 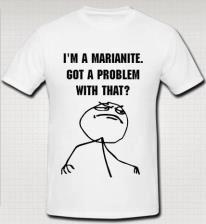 MARIANITES of Holy Cross, is a worldwide religious congregation based in New Orleans, USA. Founded in 1841, it runs a college with a gigantic statute of St. Mary in front of their campus main building.

The Marianite is the official monthly publication of the St. Mary on the Hill Parish in Augusta, Georgia, also in the United States. E-mailed to parishioners, it includes information about people, activities, and events in the parish and community.

Then there is the Marianite Church of unknown location. It is a breakaway Catholic group led by a matriarch.

Several other religious groups in the Philippines and elsewhere proudly call themselves ‘Marianites.’”

Here in Ilocos Norte, a growing number of student leaders and writers have called themselves Marianites. I assume it was derived from the first name of the father of President Ferdinand Marcos who built the Mariano Marcos State University.

MMSU President Miriam E. Pascua has never used the term though, save for one occasion—the 2012 Freshmen Orientation Program—where she addressed new students, “Welcome to MMSU, you are now, borrowing from Sirmata, ‘Marianites.’

Indeed, the term has been used by our campus journalists, even in front page news. Current Sirmata Chief Editor JV Toribio explains that in the absence of a style book, they have not officially agreed to use “Marianite” in their issues. He says that since his freshman year, and that was three years ago, “Na-inculcate na po sa’kin na ganun talaga tayo natatawag, kahit saan po naririnig ko ‘yun.”

While Toribio finds no problem in the term’s usage, he recognizes the need for “the consistency and genuineness in defining our identity.” Dr. Alegria T. Visaya, university and board secretary, has a similar thought: “If we want to build up our own identiy which will speak really about our unique characteristics as constituents of MMSU, we should pick out a word which will be exclusively for us.” She even floated the idea of initiating a contest for this purpose. Sports and Socio-cultural Director Arsenio Gallego and Student Services Director Henedine Aguinaldo also expressed reservations about the aptness of the term “Marianite.”

Even the alumni are shaking their heads. Dr. Joel Manuel, now a high school principal and arguably the most awarded Iluko writer the university has nurtured, has his own share of discomfort about the new term. “Madin sa, madi,” he said in an interview after receiving two first prizes—in poetry and short-story writing—in a prestigious literary competition concluded recently. So what then, Manuel wondered, should we call ourselves with?  “Marcosites,” he said in jest, sounds like “Muscovites,” which refers to residents of Moscow. During his time, they were simply called “MMSU students,” and he said there was no urge to coin a term. END_OF_DOCUMENT_TOKEN_TO_BE_REPLACED

With a General Weighted Average (GWA) of 1.1994, Dane Mikhael S. Calica of the College of Arts and Sciences’ BS Biology program, is only the university’s second recipient of the highest Latin honors, and the first in fourteen years.

A native of Laoag City, Calica is the eldest of three children of Gary, a seafarer, and Marilec, a full-time mom. He finished high school at the Ilocos Norte National High School – Special Science Class in 2009. Despite having the highest average in his batch, he graduated only as first honorable mention due to low points from extra co-curricular activities.

Topping the 2009 MMSU College Freshmen Admission Test taken by around 5,000 examinees from various provinces in Northern Luzon, he initially enrolled in BS Nursing but shifted to BS Biology after a semester. Although extra co-curricular involvement does not count in earning Latin honors, he served as president of the Biology Circle for two years, and as president of the CAS Student Council in his senior year.

I am currently writing a full feature on Dane who is not really your typical nerd. In the meantime, Here are some more “Summa” facts: END_OF_DOCUMENT_TOKEN_TO_BE_REPLACED

Yesterday was toxic for me, having to shuttle from one place to another to speak in an event held in a vast hall teeming with dreamy eyed graduating students, do interviews and gather data for articles I am working on, and struggle to sit down, finally write, and beat deadlines.

And so, I decided to go to the SPA later that night. And no, not to a place of jacuzzi, rose petals, and scented air, but to a place even more refreshing and enlivening.

I have always been intrigued by the Special Program for the Arts (SPA) of the Ilocos Norte National High School. What do they do there? Are they a bunch of the stereotyped artistic weirdos? How artsy do they really get?

The school held its annual exhibit and recital last night, March 14. I was not personally invited, I just responded to a Facebook post informing everyone of the event. And, yes, it was a joy.

There was an indoor exhibit and a musical-theatrical recital at the school grounds.

I spent some time listening …to the inspiring talk of my friend Aian Raquel who I didn’t know was the event’s guest of honor and speaker, to a boy who made passionate love with his violin, choral presentations, a stage act, and then more. Organizers were offering me a good seat with the best view but I chose to stand at the back so I could gallivant at my wish.

Aian said something to this effect, and I am rephrasing here: “You are lucky to be educated formally in the arts… my initiation to the arts I, as a grade schooler, attained by watching beauty contests, concerts, and events held in Laoag and Batac, places away from where I lived: the island of Badoc… I was never really good at one particular art form. I am not a good singer, dancer, or writer… and some of my mentors and friends teased and chided me for being a ‘jack of all trades’, but one woman reassured me that I am on the right path. She referred to what I have been doing and which I should continue to hone, ‘art direction'”

I spent more time inside the exhibit hall, marveling at multimedia arts, visual arts, and creative writing manuscripts. The kids were game enough to do “mini-recitals” inside the exhibit room, and just for me. I asked them about the stories their young, imaginative minds churned out. They seemed nervous at the prospect of storytelling in front of a shining, shimmering, widening forehead, but they carried on.

John Louis de la Cruz shared the plot of his still unproduced short film, “On a Sunday Afternoon”. The story is simple and the conflict may sound trivial, but who wants complications on a Sunday afternoon? It is about a boy who wanted to hang out with his friends.  But the friends were not replying to his text messages, and so he felt sad and was in a bad mood. Later in the evening, his friends paid him a surprise visit, and he was happy… and so is the ending of the story.

Chryztlerr Nicolas wrote the short story, “Marcus the Superhero,” which is about a man avenging his people from violence. Asked about his inspiration, the diminutive boy spoke of the crimes that befall us in real life.

And this gallery brought me back to the BMX days of my happy, carefree childhood: 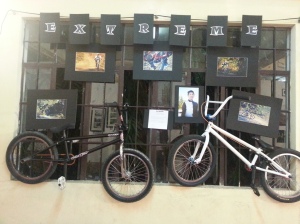 Some students approached me for photographs and asked me to sign their book compilations which I would have borrowed and read at home if only I was not too shy to ask. I was glad to meet these young writers, my fellow writers, and, while there, as I was browsing through their works, I closed my eyes for a few seconds and wished that they would not give up on their literary aspirations.

Kudos to the young artists of Laoag City and Ilocos Norte. May our tribe increase in every way, all the way. And with these sexy bottles of beer, I say: Cheers!