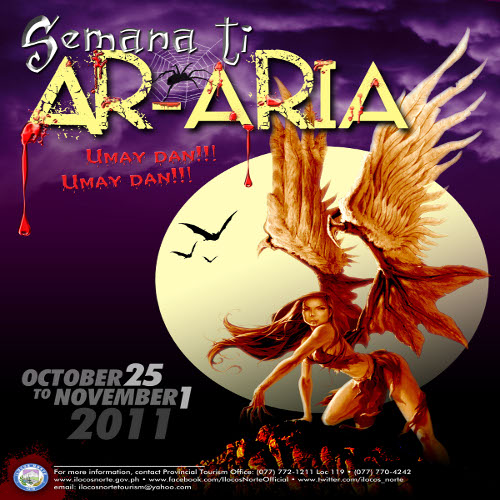 MY DAD, if only he was given a chance to get into the fields of media and communication, would have hit it big time as a writer or filmmaker on the “dark side”. Coming from work (he was a market vendor), just before sunset, he would gather kids in the neighborhood and tell them ghost stories in unparalleled fashion. The kids, their hearts thumping wildly, would end up shrieking and running. But they would always beg my dad for more thrill and horror.

Today, those kids are grown-ups, and my dad is too old to tell stories. Many of them, including those who are now abroad, would ask me to say hi to their idol. They would regret that their kids no longer have the chance to be transported, via the storytelling sessions with dad, to dark and scary dimensions where only the imaginative and brave dare go. And I am not only talking here of ghosts, but also elementals like the kapre, ansisit (duwende), sansilmo (that ball of fire that let’s you lose track of your journey), and the manananggal (that lady with a detachable upper body).

This, dear karikna, is the reason why I am excited about the upcoming Ar-aria Festival to be held here in Ilocos Norte. The event aims, not only to scare, but also “to highlight the customs, traditions, and superstitions of the Ilocanos in remembering their departed ones.”

It’s the biggest in the country, I argue, and maybe even in Asia and the World, because we are not only talking here of a Halloween Party in a bar or an area. This is tens of towns and cities coming together in a multitude of events.

“We are serious in creating and organizing big events such as the ‘Semana ti Ar-aria’ to attract more tourists here and abroad” Gov. Marcos said in a statement.

Moreover, simultaneous with the Halloween treat will be the 1st Ilocos Norte Film Festival on October 25-27. Film screening of Pinoy horror movies will be shown in Robinsons Mall Cinema 3 and at the Teatro Ilocandia of the Mariano Marcos State University. And for free!

Laoag City’s Tina Tan, one of the country’s top lifestyle bloggers, wrote in her blauearth.com, wholeheartedly I hope, that I could also be a good food blogger. Yes, I love food and I love blogging, but I’d rather write about sweet stories in a society gone sour, or bring out the spice in a phenomenon that at the surface seems bland, or sprinkle a dash of salt on agents of tastelessness.

But, this time, just this time, in the spirit of Tina Tan, who is once again a contender in this year’s Philippine Blog Awards, let me write about food. And allow me to present one that Madame Tina (she doesn’t enjoy being called this way; says she is not a fortuneteller) has not written about.

It is the best crispy dinardaraan (dinuguan) in my universe. And it is to be found neither in the famous Dawang’s in San Nicolas, arguably one of the most expensive carinderias in the country, or at the top-rated La Preciosa Fine Dining Restaurant in Laoag.

Ironically, it is located almost in front of the Iglesia ni Cristo Church along Rizal St. in Laoag City, and is adjacent to Partas Bus Trans. To the uninformed, they don’t eat animal blood.  (I am referring to members of the Church, not the bus drivers.)

The dinardaraan’s meat is as crispy as it could get and is very tasty because it is laden with fried internal organs sliced thinly. I saw there some pork bara (lungs) which is okay with me because smoking, I’m sure, is not one of a pig’s vices. The timpla is swak na swak (an observation shared by MMSU’s Kat Aguilar who I asked to taste test), and the aroma, oh-so-tempting.

Okay, I must admit it is not a healthy food. Blood is one of the riches sources of bad cholesterol. Moreover, internal organs provide you with uric acid overload. But one must always strike a balance between quality and quantity. What for is a long life without sinful pleasures? On the other hand, what for is an orgasmic life if you’re gone too soon for a second round? Even my mom, 69, who suffers from diabetes, indulges in dinardaraan. “Sagpaminsan met lang (just once in a while),” she reasons out. My dad, 74, is a blood eater, too. END_OF_DOCUMENT_TOKEN_TO_BE_REPLACED