The saving grace is that it was partly shot in scenic Ilocos. Aside from that, there is nothing else much.

Let’s begin with the acting department.  The main stars—save for Ruffa Mae Quinto who was outrageously funny as usual, and Lovi Poe whose physical sensuality is matched by a most promising talent—were wanting in the acting department. The boys, for their part, delivered their lines in a manner inferior to a grade one pupil. Aljur Abrenica was mismatched with his part as a rich and smart college rascal, and I surmise Mikael Daez and Tom Rodriguez, the other two beefcakes, are cut out for the role of actors who simply do not know how to act. John Lapuz’s performance did not help. He played the role of a sophisticated bakla but his parlorista side refused to be subdued. It did not help that Martinez is really known to be more of a brilliant writer than a good director.

Also, the sequel was not as sensual as the 1980 campy film about four beauty queens and a few company stuck in an island-desert. Sex is an important component of the movie, and there was lack of it. Whatever love scenes were there lacked steam, and this we blame on SM which refuses to show R-18 movies in their cinemas. Any movie not shown on the country’s biggest mall chain fares miserably at the box office.

Other aspects of the production, particularly production design and cinematography, were good though, and this is in no small measure because of Rainier Alvarez, son of Tata Pepito and Nana Linda, whose family is very close to ours. Kuya Rainier, a Laoag native, is production manager of the movie co-produced by Regal Films and GMA Films. Kudos to Kuya Rainier for his big leap from events organizing in Ilocos to playing a major role in mainstream movie making.

Still, the 2011 movie seriously pales in comparison with the original Temptation Island, which attracted a cult following and which is considered a classic, so classic that the following lines of 32 years ago still bring much joy to moviegoers’ ears.

Here are some strange, biting, and quotable lines:

2. You see, I’m a crook and a damn good crook. And I can tell another crook when I see one – tulad mo.

6. Mag-alis kayo ng panty kung gusto ninyo, but my panty stays right where it is!

8. Everybody needs a shipwreck once in a while.

11. What about my flat, my Mercedez, my money, my jewels, my gourmet’s kitchen? My God, kahapon lamang kumakain ako ng pagkasarap-sarap na fried chicken and cold rose wine. And now, I would sell my soul to the devil for a glass of fresh water.

12. Why don’t you be yourself for a change! There ought to be a law against social climbers. You ought to be executed!

13. What are beaches for than to bitch around with fellow bitches?!

Martinez consciously tried to make his movie a faithful copy of the first, but how can you equal, much less outdo, a classic? With nothing substantially new in it, the copy turns out forgettable and is headed to oblivion. As Temptation Island 2 did not say anything new, the lines, at least, could have been delivered in ways better than the original.  This did not happen. I am happy though that it is doing well in the box office–27.5-M in the first five days, coming in second to the 341.92-M Transformers 3 has grossed in two weeks.

There is an apparent lack of creativity in the country today, which I suspect is why moviemakers just settle with lousy remakes instead of churning out new ideas.

And this is why I am happy with the success of “Looking for Johnny Moon,” the First Ilocos Norte Digital Arts Festival, held July 14-16 at the Plaza del Norte, formerly Ilocos Norte Hotel and Convention Center. Attended by artists, teachers and students from the northern regions and Metro Manila, the event jumpstarted the province’s bid to be a hub of digital creativity. The stellar pool of speakers in the search for new Juan Lunas were led by award-winning directors Soxie Topacio and Mark Meily.

Leave it to Manang Imee, who would really just produce movies and other creative stuff if the world were not on her shoulders, to initiate events that celebrate the madness that is human artistry.

And why not, we have scenic locations that even Hollywood finds difficult to ignore. All we need are people crazy enough to record on film, and in a manner amazing, the many temptations they struggle against or fall into in their own islands, imaginary or real.

In the interest of fairness, dear karikna, I talked to Mrs. Elizabeth Madarang Raquel, former president of Gumil Filipinas, regarding the ‘Stupid Quezon’ controversy that has haunted concerned parties in the past two years.

To the uninitiated, just some background. Headlined “University of Hawaii prof calls Quezon stupid,” the news article was about Dr. Aurelio S. Agcaoili who, in good cheer, called the late president Manuel Quezon “stupid” during a Mother Language Education forum held at the MMSU College of Teacher Education. He felt that Quezon’s ‘one-nation, one language’ policy was a nineteenth-century measure that led to the decline of Philippine languages other than Tagalog. The news article said many participants, including teachers and students, were offended by the remark.

Raquel admitted that it was indeed she who wrote and contributed the news article bylined Mark R. Limon, published in the July 27-August 22 2009 issue of The Ilocos Times. She vehemently denied, however, that Limon did not have knowledge the article bore his name. “How can he not know?,” Raquel asked rhetorically in Ilocano, “he used to help me encode my articles, and he typed and emailed that particular article.” Limon, in an earlier interview, told your karikna that his former supervisor indeed used him as encoder but that he was informed of the news article’s byline only after it was published. Confessing to be an avid reader of this column, Raquel said she was hurt by my recent article, “The Lie of Eli.”

But did Limon really allow Raquel to use him as dummy? Definitely, according to Raquel, “Kinayatna met ta kayatna met ti agpopular.” (He agreed because he also wanted to be popular.) She described his former protégé as “ambisioso.” END_OF_DOCUMENT_TOKEN_TO_BE_REPLACED 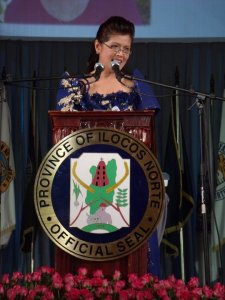 I wish to take exception to Herdy La. Yumul’s column titled “Utlegged”, published in the other week’s issue of your respectable newspaper. While I support the young writer, who happens to be my son, in all of his undertakings, his rather harsh commentary on Bishop Sergio Lasam Utleg is something I do not approve of. In fact, I found myself weeping a lot because of the grief and agony the article gave me.

As a church volunteer, I have always known Bishop Utleg as an honorable person and a respectable church leader. He is humble and kind, caring and nurturing.  I appreciate very much that he sacrificed his whole life in the service of God’s people. I, my family, and many other churchgoers attest to his vast contributions in nurturing the spiritual lives of his constituents, and in helping uplift the lives of the poor and the oppressed. No doubt, he is well loved and well admired by his flock. END_OF_DOCUMENT_TOKEN_TO_BE_REPLACED