I ALWAYS tell my students, almost all of them in their teens that, at this point in their lives, they probably enjoy spending more time with their barkada—with whom secrets are shared, ‘happenings’ are enjoyed, and brave youthful explorations are carried out—than with their family members, especially the oldies, whom they perceive as KJ, epal, and close-minded.

I remind my students though that, as I myself would find out myself when I was a teenybopper no more, many friends come and go, while the family, fortunately or not, remains.

I was browsing though old photo albums the other day to look for pictures we need for our parents’ golden wedding anniversary next month when I noticed in the prints someone who has always been present in important occasions like birthdays, graduations, and weddings. He has been there during happy moments, but even more in difficult ones.  He is a vital constant in our family.

The second youngest in a brood of nine, German Nicolas Labayog was the only among his siblings who lived with his parents, my lolo and lola, until their twilight years. He took very good care of them. He gave them all the reasons to be happy.  He always made them laugh even as he constantly reminded the octogenarians to wear their pustiso.

With our grandparents gone, Uncle Gerry, although now based in Hawaii with his super beautiful wife Auntie Elsie, is the unifying force in the Labayog Clan. He would encourage us to gather and celebrate as a family, occasions big and small.  He would not be physically present anymore, but we would always feel his love. He would know if some members of the family are at odds, and would go at lengths to negotiate peace. I and my cousins each have our own stories to tell of gratitude and appreciation of Uncle Gerry. He tells you he is proud of you, and you would feel that he means it. He gives sound advice in a very tempered way and helps you realize your follies but never judges. He has ultimate belief in one’s capacity to do good.

I know he has mixed feelings about me right now. I am sure he is proud of me, but at the same time he feels hurt because of some of the topics I tackle, particularly those on the Church, and on bishops and priests.

Uncle Gerry holds in high regard Bishop Sergio Utleg, whom I have written about, most of the time unflatteringly, in my column. He describes the bishop, whom he hosted once when the latter visited Hawaii, as very humble and down-to-earth, which, in fact, I do not contest.

When he still lived in Ilocos, Uncle Gerry was a Lay Eucharistic Minister. A skilled guitarist, he also volunteered to play music every Sunday in masses at the provincial jail celebrated by then Bishop Edmundo Abaya, and at the provincial hospital, too. In those masses, I and my cousins, and a couple of our friends, would sometimes play percussions. Although we looked like a ragtag band, I think we helped make the sick, physically and spiritually, happy. Uncle Gerry until today is very active in a church community, and has gone to pilgrimages called on by the Pope.

Yes, Uncle Gerry is baffled when I write about the Church, but I am sure he can tell a good opinion from a distasteful one. If there is anyone in the family who is more opinionated than I am, it is he. I remember that as a child I would listen to Uncle Gerry’s phone-in commentaries on radio.  He felt very strongly about fighting corruption and inequity in governance.

Now in the States, the former vice president of Gumil Hawaii, an organization of Ilokano writers, is even more updated on current events than with most Filipinos. We would talk over the phone about recent developments in this country that we both so love. He feels devastated that our leaders today betray the trust of the people they are duty bound to serve.

Although respected and looked up to by folks at the Laoag City West Riverside, Uncle Gerry never ran for public office, but when asked to take the place of a barangay official who resigned, he obliged.  That was in the early 1990’s, and Uncle Gerry remains well-remembered for his selfless service to the community.  He brought honor and dignity in everything he did. He was particularly concerned about molding the minds of the young, the reason he institutionalized in a public elementary school in Laoag City, the Good Samaritan Awards, which recognizes and rewards children who exhibit good behavior.

In Facebook, where he has strengthened his presence in our lives, Uncle Gerry always reminds younger members of the family, grandnephews and grandnieces who also call him ‘Uncle Gerry,’ to serve as “role models” to others by restraining from posting foul messages and by avoiding using words (such as the “F” word or the acronym “WTF!”) that, he feels, betray good values. I admit that sometimes, a generation gap brews because in Facebook, power relations based on age, wealth, and status are blurred.  In Facebook, parents and chidren, bishops and sinners, kings and paupers, all of them are just friends who have equal voice. But I know Uncle Gerry is a good friend because real friends are ones who can tell us truths that unsettle us.  Such was the case when he messaged me:  “Sana naman naisip mo kung ano ang mararamdaman namin (I wish you had thought about how we would feel.” Uncle Gerry has never really asked me for anything, except that I spare Church officials from criticism.

As a person, I am then torn between performing my sacred duty as a writer and giving in to the request of dear family—particularly my mom and Uncle Gerry. I would like to assure you though that everything that I write about, especially those on the Church, result from careful discernment and soul-searching. Uncle Gerry has the choice to treat me still as the Little Herdy of his memory, but am glad he looks at me as a person with reason and maturity.

I know Uncle Gerry understands where I am coming from. I know, too, that he hopes I would reconsider my views soon or sooner.  If there is one person who knows how impermanent human beings’ perspectives are, it is Uncle Gerry. During the Marcos presidency, he was one of the leaders of the student activist movement in the North. He was, in fact, arrested and sent to jail for initiating resistance activities.  Eventually though, for reasons I am yet to know, he became a Marcos loyalist, standing by the integrity and virtuousness of the late president. Crossing over between two extremes in the political color spectrum may be a sign of disloyalty and weakness to some, but I look at his case in a positive light, for it really takes a lot of courage, and humility too, for a man to accept that he was wrong. I’m sure this prayerful fellow looks forward to the day when I could muster the same amount of courage.

Uncle Gerry and Auntie Elsie did not have a kid of their own.  For what reason, God only knows.  It would be selfish to say that the couple did not have their own child so they could love all of us the way they do, but what I am sure though is that families exist so we can have an avenue to understand what love, compassion, and understanding—in their purest and supreme form—are about; and that we become relatives not as result of chance, but of destiny.  Every clan deserves an Uncle Gerry, and I thank God for the one He blessed us with.

A Christmas filled with joy and a New Year most prosperous I wish for you, dear karikna, and for your family. 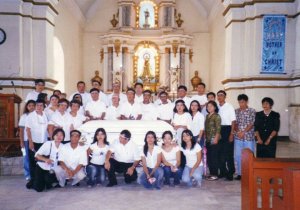 Uncle Gerry seated, center. Taken during the funeral mass for our beloved Lolo Simply, this probably just a fourth of the whole Labayog Clan.