MY FRIEND Rommel, a highly regarded scholar from Cagayan, observes that going to church is no different from frequenting a videoke bar. You go to these places to find relief from life’s cruelties.

The great American statesman Benjamin Franklin posited that “beer is proof that God loves us and wants us to be happy.”

I argue that beer is better than religion, and here are 18 reasons why.

1. Beer doesn’t pretend to be an expert on sex and birth control.

2. Beer companies pay their taxes. In fact, their “sin taxes” are higher than in other industries. The church, in an act of ungratefulness, warns of ‘civil disobedience’ over the Reproductive Health Bill, an issue it really has little knowledge of, and the government has full responsibility for.

3. Beer has not abused women and altar boys.

4. Beer is not under the pull strings of the Vatican. Filipinos have proven that they can make excellent beer right here, and that the same is worth sharing to the world. I personally long for San Mig Light.

5. Nobody’s ever been burned at the stake, hanged, or tortured over their brand of beer.

6. Religion, not beer, is the reason why our country was named after a cruel Spanish King who, as a big fan of the Inquisition, made sure church dissidents were either tortured or executed.

7. Beer has never caused a major war or wholesale acts of terrorism.

9. Beer can get you intoxicated for a few hours. Dogma can poison human existence for life.

10. No matter your sexual orientation, you can be a good beer drinker. Sexually active homosexuals, considered by natural law as an anomaly, are considered lost souls.

11. Beer doesn’t discriminate against women. Thomas Aquinas, doctor of the Catholic Church, argued that females are defective males, which should explain why the gap between the powers wielded by nuns and priests is so wide, wider than my shining, shimmering forehead.

13. Beer bottles are very useful, they are even being utilized for jueteng draws. The church spanks jueteng lords with one hand, and accepts “donations” from them with the other. User friendly!

14. Only the priest drinks during the mass, no one has the callousness to do that in a drinking session.

16. Beer does not prohibit revolutionary insights and crazy ideas, unlike the church which, for centuries, silenced artists and scientists for “heresies” that the world later recognized as truths. Galileo Galilee would agree.

17. Beer lets you handle, even for a few hours, the resentment and frustration brought about by religion.

18. Lastly, they don’t force beer on minors who can’t think for themselves. Catholics are baptized years before they can shout, “Damaso!”

Given all these reasons, I join my friend Rich Sareno in expressing full support to RHB, and, borrowing from veteran actress Susan Roces’ popular indictment of Gloria Arroyo, “not once, but twice.” That means a big yes to two RHB’s: the Reproductive Health Bill and RedHorse Beer.

Beer is good and the pope is German. 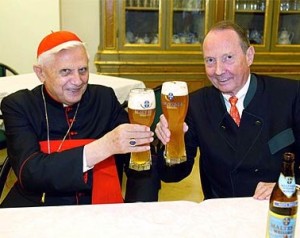 13 thoughts on “Why beer is better than religion”