That, dear karikna, is not the number of yellow shirts I have purchased.  I surmise not even Noynoy Aquino has that many in his wardrobe. Two hundred pesos is the current rate in the vote-buying operations for the first congressional seat in this province.  I have firsthand information that two of the strongest contenders for the post have started special operations as early as the first week of April.

With a strong grip of barangays in Laoag City, one candidate operates through barangay officials who hold a list of registered voters for each household.  Upon payment, a recipient is asked to sign beside his/her name.

Another candidate, who promises a fresh brand of politics, seems to find difficulty veering away from the dark shadows of his old man.  His camp, however, has a more legal way of doing things.  They give allowances of two hundred pesos to every volunteer.  This seems acceptable because candidates really have to take care of their volunteers.  The problem is that just anyone and everyone can be a part of their payroll.  All that you have to do is go to their headquarters and fill out a form.  The result:  some barangays would have hundred, if not thousands, of barangay coordinators.  If this is not circumvention of the law, what is?  Same pig, different collar.

While it does not shock me anymore that this happens in every nook and corner of the archipelago, it disturbs me that it’s not only the poor who accept dirty money from politicians.  Almost everyone now does, and this includes my friends who are professionals, and even those who live comfortable lives.  God, I even have friends who are involved with the election watchdog Parish Pastoral Council for Responsible Voting who admit to ‘selling’ their votes. END_OF_DOCUMENT_TOKEN_TO_BE_REPLACED 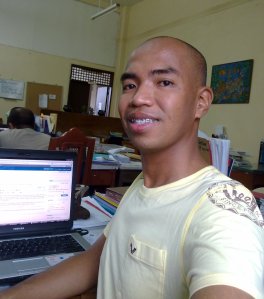 YOUR karikna is updating his wardrobe these days to include a lot of yellow shirts.

I have, in fact, scrounged on each and every rack of all department stores and boutiques in the province to search for really good yellow tops.

Note that shopping, as my friends would attest, is not really my cup of tea.  Too lazy to shop, I am neither vain nor frivolous when it comes to clothes.

You see, it’s tiring and complicated enough to find the design you like, and when you eventually find what you look for, your preferred color may not be available, or your size is out of stock.  It could get really frustrating.

But I went on shopping anyway as I decided to wear yellow every single day until May 9.  I’ll wear white on May 10 because I, my Comelec media accreditation card in tow, will cover the elections and prudence dictates that I sport a neutral color.

Starting with buying just anything yellow, I eventually developed a four-fold criteria in my summer shopping spree. END_OF_DOCUMENT_TOKEN_TO_BE_REPLACED

Your karikna occasionally appears on television as political analyst, offering insights on events and issues. Those who would see me on TV give an interesting feedback: “Naglaing ka ag-English.”

I am surprised because although I speak mostly in the native tongue, it is my sparse English that viewers notice. It is not the substance of my opinions that they remember but my facility of the foreign language. No more English then next time.

BARANGAY OFFICIALS are supposed to be non-partisan. Unless they resign or take a leave of absence, they are not supposed to campaign, much less use public resources, for any candidate or party.

The Department of Interior and Local Government perennially reminds barangay officials that their mandate provides that they remain neutral. Violators may be slapped with hefty penalties if caught participating in any partisan activity.

Unfortunately, such is not the reality in Philippine politics. Most barangay officials are the biggest rah-rah boys of candidates for public office. Worse, these community leaders become instrumental in vote-buying. This is very disturbing, dear karikna, because Comelec deputizes barangay officials to ensure the conduct of clean, honest, and credible elections.

Sad to say, I am not aware of any barangay official who has been prosecuted for actively supporting particular candidates.

It was a message from Dennis Quines of Laoag City, one of my former students. I was both surprised and overwhelmed that he would ask me such question. Surprised because Dennis and I really never got to talk about anything beyond Logic, the course he took up under me; overwhelmed because Dennis is a first-time voter who is very carefully in assessing his choices, and I felt obliged to offer good advice.

Unfortunately, I cannot proclaim my bet to the public, although my friends already know who I am for. My public persona as journalist, political analyst, educator, and civil servant requires that I maintain a certain level of objectivity. Showing political color would be divisive, and people will either not listen to me anymore, or will begin to look at me with eyes of cynicism if I do so. Philippine Daily Inquirer’s Conrado de Quiros takes a different path in vigorously supporting and defending Noynoy. I will not follow his lead.

But I could tell Dennis the type of candidates I will not vote for, so he might want to go through a process of elimination. END_OF_DOCUMENT_TOKEN_TO_BE_REPLACED

I knew all along that you are Hitler’s reincarnation, what I did not know is that you are also a remnant of our oh-s0-macho past.  I would not have thought you embrace such gender stereotypes.  After all, you painted Metro Manila pink. 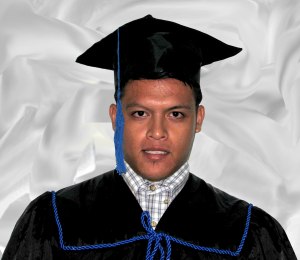 DEFYING STEREOTYPES on student athletes, this guy proves that there is as much gray matter between his ears as the muscles in his arms.

Arnel Jordan B. Doming has gathered 15 gold medals from various regional and national sports competitions he participated while in college. Last March 26 he received yet another. “It is the most precious one,” he says.

Four years ago, Domingo’s future was unsure. Although he graduated as valedictorian both at the Bagbago-Puttao Elementary School in his hometown Solsona and at the Ablan Memorial Academy in the same town, he could not go to college because of financial limitations. Domingo’s father Erneso died when he was in fourth grade. His mother Lorna is a housekeeper. END_OF_DOCUMENT_TOKEN_TO_BE_REPLACED

It was bound to die, because, with the advent of the comfy Robinsons cinemas, nobody was happy with it anymore, except, of course, the huge, cat-like rats that have long infested it.  I already abhorred it long before Robinsons came, the facilities were poor and the movies came as fast as justice is delivered in Philippine courts.  It just had to go.

But when Isabel did bow out, I was saddened.  I began to realize how much memories are housed in that structure.  There is where daddy brought the kiddy me to watch English action movies which he patiently translated so I could understand.  There is where I had my first movie date as a teener.  There is where my mom and her kumare shed many a tears watching the movies of Vilma, Nora, and Sharon.  And there is where my late Tiya Carling, an old maid who loved going to the movies, frequently went to before the advent of cable television.

Saddened is an understatement. END_OF_DOCUMENT_TOKEN_TO_BE_REPLACED

I was motorbiking at Rizal St. in Laoag when I passed by this funeral carriage infront of the Aglipayan church.  Although the sun was sizzling hot, I just had to go back and take a pic of it.  I want to be in that vehicle when they bring me to to my grave.

I hope you do not find it morbid, karikna.  Death, they say, is the only sure thing in life.  While no politician is assured to win the election (unless unopposed), everybody is bound to die sooner or later.

When I die, I do not want any of those bands which will destroy the solemnity of my wake and burial.  Some bands even perform green, sex-laden songs during ‘last nights’ would you believe?  One song they performed at a wake I attended goes, “Sisid marino, naglaing toy nobyok, iyunana toy baba santo ngumato. (Marine dive. My boyfriend is so good, he starts down below then works his way up).

I also do not want those annoying speakers playing religious songs at my funeral march, I would have had enough of noise during election periods when I was alive.

My remains I pray brought directly to the cemetery, no stopovers at the church.  I would not want to make the church richer by my death.

I want all the Ilocano rituals and practices for the dead observed.  And please don’t call Atong King, no gambling please.

END_OF_DOCUMENT_TOKEN_TO_BE_REPLACED

On our last meeting, I asked my students about their top five learnings in our subject Sociology1-Society and Culture, and this one I find most amusing.  Very attentive girl this civil engineering junior. 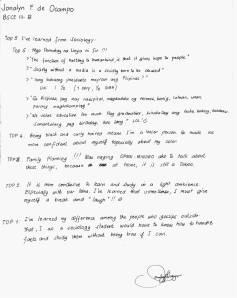