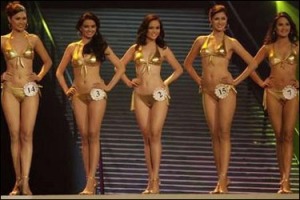 Not once, but twice!

As with the past years, at least two beauty pageants are touted as highlights of the 2009 Pamulinawen Festival. The Search for Ms. ABC (Association of Barangay Councils) was held on February 4 at the Centennial Arena while the Search for Ms. Laoag is slated on February 10 at the same venue.

More mature societies have already shunned the idea of the traditional beauty pageant. Radical feminist groups, in particular, have lambasted beauty tilts as a form of exploitation of women and the perpetuation of a patriarchal concept of human aesthetics.

For what is a beautiful person? Organizers, of course, harp on the idea that beauty comes from within, blah, blah. But the competition criteria belie this. The minimum height requirement is 5’3”. Plus, you must look good in a swimming suit and, ergo, you must have a softdrink-bottle-shaped physique.

Such pageants, of course, would claim that they promote beauty with a purpose. This is why they are known for tokenism as well, which means doing something in a highly visible manner, though with almost-zero impact. Miss ABC candidates, for instance, went to Shamrock Elementary School to feed some students with miki (or was it lomi?) and juice. The ladies, as expected and choreographed, registered well in their photo/video opportunity while handing out food and goodies to these school children. Alas, they began to look like politicians.

But of course, beauty pageants are a political tool. All of the city’s eighty barangay captains went up the stage at least twice—at the beginning and towards the end of the program—thus stealing the show and disturbing the night’s momentum.

In retrospect, the show’s political nature was made clear as soon as the faithful was asked to stand for the Invocation (opening prayer) during the pageant night.

My favorite song “Lead Me, Lord” was played and I would have enjoyed praying and meditating if it were not for my stomach’s twisting and swirling in violent protest of what I saw. In the accompanying video, images of Jesus Christ were flashed on the screen along with pictures of Laoag City Mayor Michael V. Fariñas and wife Chevylle in various activities.

It was not only inappropriate to do that in a prayer, it was almost sacrilegious. Whoever did that prayer-cum-political-ad must be fired by MVF and should be hired by Gloria Arroyo who loves the idea of hard sell. Malacañang, callous as it may be in churning out Gloria papogi ads, such as the PAGCOR and PCSO commercials that interrupt our otherwise ecstatic watching of Manny Pacguiao’s fights, has not gone that low. But, if it could be done in Laoag, why not on the national stage as well? Anyway, a congressman allied with the administration has argued that Arroyo is like Jesus.

Make no mistake. I honestly admire the visionary efforts of our local officials, especially MVF and Madam Chevylle, in improving the quality of life of our people. While I express dissent on the construction of a mall in downtown Laoag, I am all for the upgrading of the Laoag City General Hospital. And while I may disagree with some of their projects, I always hold them with respect and in high regard.

In his speech, the mayor reassured his constituents of his continued support to education, health, and job generation. Such reassurance could not have come at a better time than today when the world is in deep economic struggle and when the Filipino family faces the prospects of more hunger and tribulation. The mayor said the right words to the right people at the right time but at the wrong place. The backdrop of glitter, glamour, and ostentation just did not fit in the drama. That two well-funded beauty pageants are held in a span of six days doubles my unease.

True, we deserve a break, and it also does us some good to indulge in leisure and recreation once in a while, but it is high time we embrace meaningful activities, shun tokenism, avoid political hard sell, stop perpetuating a boxed concept of beauty, and liberate women from human commodification that is the beauty pageant.

Then again, organizers may argue that Filipinos really love beauty contests and that they are just giving what the audience wants. They may reason that beauty pageants are done all over from the world stage to the smallest and most obscure of barangays.

But that is beside the point. This year’s Laoag City Pamulinawen festival espouses the theme, “Radiating rays of endless possibilities”.

But instead of exploring possibilities and breaking new ground, we fell victims, yet again, to the formulaic concepts of entertainment and fun.

48 thoughts on “NO to beauty pageants… and political invocations”